This is Scientific American's 60-second Science, I'm Christopher Intagliata.
Hundreds of millions of years ago, reptilian predators called ichthyosaurs swam the seas. Their fossils look fearsome. But paleobiologist Ryosuke Motani of U.C. Davis says they may have looked more like friendly dolphins.
"Maybe in life ichthyosaurs would have been cute—a﻿﻿﻿﻿﻿t least the smaller ones."
Motani's team studied one such specimen found in southwest China. It was 240 million years old—15 feet long. But it seemed to have some extra bones in it—which Motani's team determined to be the remains of a 13-foot-long thalattosaur, or "sea lizard," the ichthyosaur had swallowed.
And, spoiler alert, the only reason they w﻿﻿ere able to see this animal in the belly of the ichthyosaur is that this gigantic meal never got digested. The ichthyosaur died soon after swallowing it.
Motani was careful to say they're not sure exactly why the ichthyosaur perished. But the specimen has a broken neck. So he gave a speculative play-by-play. Perhaps, he says, the ichthyosaur snapped at the sea lizard, but the lizard f﻿﻿ought back.
"And this fight between the two was fierce, probably." 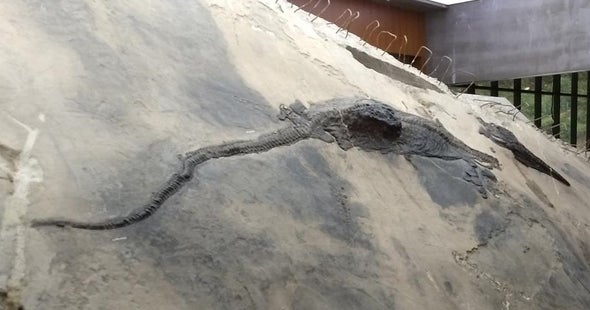 So the ichthyosaur fought to subdue its prey, damaging its neck in the process. Then it had to dislodge the prey's bony head and tail from its juicy midsection.
"Now the predator had to do it through jerking and twisting like crocodiles do."
Also bad for the neck. And finally, the ichthyosaur had to swallow the animal—perhaps using inertia or gravity to shove the prey down its gullet.
"And the chances are, by the time it was ingested, maybe the neck damage had accumulated to a certain level and maybe the neck could not support the head."
Details of that ancient battle appear in the journal iScience.
The reason this analysis matters is you can only infer so much about who ate who by looking at teeth. This fossil offers direct evidence that these ancient beasts sometimes bit off a whole lot more than they could chew.
Thanks for listening for Scientific American's 60-second Science. I'm Christopher Intagliata.